For Alethea Root, a Berkshire native, her career as a director started at Monument High School. Standing in front of the Beacon Cinema in Pittsfield, just before the Sunday morning screening of her first feature film Part Time Fabulous, Root commented that the play she directed was the “first to make a profit” for the high school.

Let’s hope that luck prevails for the compelling and insightful film she wrote with Jules Bruff, who stars in the film as a woman suffering from clinical depression (a state of depression and anhedonia so severe as to require clinical intervention.) When Bruff  joined the dialogue they agreed that the film has a narrowly targeted subject and potential audience, but they want “to make films that matter…

When you put Fabulous in a movie title, you’re setting the bar pretty high. Even if you qualify it with a Part Time, you got expectations to consider. Part Time Fabulous will fulfill those expectations and then some, but maybe not quite like you would expect with your…expectations. read the entire review

Great Barrington native Alethea Root, now pursuing a filmmaking career in Los Angeles, makes her homecoming with “Part Time Fabulous,’’ screening on Friday and Sunday. Aiming to dramatize the effects of clinical depression, her directorial debut is based on the personal experience of producer-star Jules Bruff. “I think a lot of people who go through clinical depression really don’t talk about it to people, so it is misunderstood,’’ Root says. “Jules had never really told anybody the things that she told me, to put into this movie.’”

This compelling feature-length film weaves its tale of love, pain, and healing by chronicling the hidden struggles and controversial perspectives of real-life depression survivors against a modern love story. The film is proudly supported by the National Alliance for Mental Illness Berkshire County Chapter (NAMI) and was inspired by Bruff’s intensely personal experience with Clinical Depression, with which she was diagnosed at the age of 20 and battled in secret for years.

Part Time Fabulous had its world premiere at the Monaco International Charity Film Festival, where creator/lead actor Jules Bruff was honored with a “Best Actress in a Narrative Feature” award for her portrayal of a woman coming to grips with her depression.

The production team began principal photography for the film in November 2009 and continued through May 2010. Bruff and Root documented more than 200 hours of personal accounts from 25 depression survivors across California. These real-life experiences are woven throughout the intense and modern love story surrounding the main characters, Mel (Jules Bruff) and Don (Bjorn Johnson).

The Berkshire’s own award-winning folk singer Meg Hutchinson lent her poignant song Being Happy for the trailer.   Part Time Fabulous will screen on Friday June 3 at 9 p.m. at the Triplex Cinema #2 and on Sunday June 5 at 11:15 a.m. at the Beacon Cinema. For more information on the film, cast, and crew, please visit the website for Part Time Fabulous; for screening information and festival passes, please visit the website for theBerkshire International Film Festival.

nthWORD: Your website mentions The World Health Organization’s projection of depression reaching 2nd place in the ranking of “Global Burden of Disease / Leading Cause of Disability Worldwide” by 2020. One of the early taglines for the film was, “Exposing the truth about her dirty little secret.” Can you talk about this choice of language when referring to clinical depression?

JB: I can’t remember who came up with “dirty little secret,” me or Alethea, but it’s something that has been in the dark and people have been ashamed of having it, or of a family member having it.

AR: We actually toiled with “the dirty little secret” because our whole point of making this film was to take away that it’s dirty, or to take away that it’s a secret, but that is what we were coming up against: that nobody wants to talk about depression, so it is a dirty little secret. Our hope is to change that perception and start a conversation where people can talk about it and not be afraid or ashamed.

nthWORD: How did words like disease and disability impact your making of the film? This secret implies shame, it implies guilt, it implies stigma. Can you talk about that?

JB:There’s so much stigma around clinical depression—and mental illness in general—but our focus is clinical depression, and it seems like people who have it are embarrassed that they have it, and they don’t feel comfortable saying that it’s a disease and a disability. I think a lot of people who have it think it’s their fault.   Read Full Article

Who: Jules Bruff, a Montclair native, living in Los Angeles

What: Bruff is a Hollywood actress who has worked in more than 40 commercials, network television shows and feature films including David Fincher’s Zodiac. She recently finished writing and producing an indie film on depression (in which she also acts) called Part Time Fabulous.
When: Bruff’s interest in acting started at 7 when her parents enrolled her in a class at the American Conservatory Theater in San Francisco. She landed her first role at 11, playing Woodstock in the Julia Morgan theater production of You’re a Good Man, Charlie Brown. “I was just a bird, but that didn’t deter me,” says Bruff, who adds they probably gave her a part with no vocals because she couldn’t sing.

Where: Bruff went to elementary school at Joaquin Miller, Corpus Christi and Bishop O’Dowd, where she took honors English, which helped her develop writing and storytelling skills. “I’m an Oakland girl to the core and am somehow surviving and thriving in the concrete jungle of L.A.,” she says.

Why: Bruff is successful because she’s involved in a number of different projects.Her latest endeavor is probably closest to her heart. She made Part Time Fabulous to unveil the dark cloud that surrounds mental illness. “Growing up I felt I had it all together and then I got sick. My message to the community is don’t be ashamed of it … help is out there.”

How: Bruff feels unknown artists now have a chance to break into the business and have their work seen, appreciated and maybe even rewarded monetarily. “The entertainment industry is going through the kind of changes seen in the music industry,” she says, with the Internet being called “The Wild West” for film and television artists.  Read Full Article 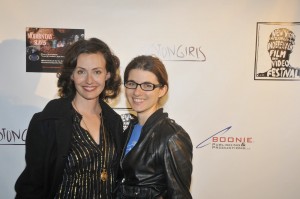 JULES BRUFF’S aspirations of making it big in Hollywood as an actress, writer, producer or director — perhaps all four — has just become intensely personal.

She has turned the camera on herself.

Bruff, an Oakland native, is starring in “Part Time Fabulous,” an 80-minute movie that she plans to enter in the Sundance Film Festival on Sept. 20 — or as many film festivals as it takes to achieve recognition.

Bruff also is the film’s co-writer and co-producer. The director is Alethea Root.

“It’s semi-autobiographical, this story,” she said last Friday at the Thornhill Coffee House upon returning to Oakland for a weekend visit with her family. “It’s a hybrid of a narrative story and a documentary.”   Read Full Article

About the film: “Literally and figuratively, one morning I awoke determined to face my personal battle with Depression.  Having been diagnosed with clinical Depression when I was 20, I have alternately felt confused, angry, embarrassed, sad, responsible, hopeless,  ashamed, and alone.  I lived within that world of emotions, living with my Depression without reaching out for information or a community. I kept my diagnosis and my experience close to my chest.  My nuclear family and a only a very select few friends knew about my problem, but only what I felt comfortable telling them. I never let anyone into the heart of my very real illness…I hope our film, “Part Time Fabulous,” will help illuminate what it can be like to live with clinical Depression.  Once you’ve seen it, please spread the word.  In making this film I discovered that most people I spoke with had a family member or friend whose life had been adversely affected by Depression.  I want to spread the word:  Depression isn’t your fault, nor should you be ashamed of it…help is available.” Jules Bruff

Current status: The team is currently in post-production on the film.  The sound editor/mixer and composer are working on the film currently, with color correction to follow.  They hope to be included in Sundance ‘11’s NEXT section.

For more information and to support the film: Check out the film’s IndieGoGo page.

Jules Bruff (writer/producer/lead actor),Alethea Root (writer/director/producer), Don Presley (producer) and Eleonore Dailly (producer) are in the final 2 months of post-production on their feature film PART TIME FABULOUS (PTF). They are in the home stretch! Their goal is to reach as many people as possible with their story. In order to do that, they need the best film possible, which is why they are asking you for help. It is time to unveil the stigma associated with Clinical Depression: help is out there and you are not alone if you are living with Clinical Depression.
PTF combines narrative and documentary to weave its story of love, hurt and healing. PTF explores and exposes what it is like to live with and manage Clinical Depression. The film follows Mel (Jules Bruff), a young woman who suddenly falls in love with a man on vacation (Bjørn Johnson). So taken with each other, he moves in with her twelve days later. It’s not until then that her deep-rooted and untreated Clinical Depression reveals itself. Her inability to deal with her illness pushes a wedge between them and ultimately breaks them apart. Mel is forced to finally face her disease alone. In the quest to heal herself, she sets out to make a documentary that exposes her truth, and the heart felt truth of others dealing with Clinical Depression.